Dedicated to serving in the tradition of Lions

Longtime member hailed as a trailblazer who paved the way for women to assume higher positions in Lions Clubs, both locally and internationally

Ellis is hailed as the first woman from Southeast Asia to serve as a director of Lions Clubs International.

The last time I was there was about two decades ago, when she was president of the Multiple District 308 (Malaysia-Singapore-Brunei) Lions Council.

Its extensive collection of Lions items and memorabilia adorning its windows, as well as the lush display of Lions banners, posters and photos on its walls, impressed me.

I still have the marble ballpoint pen she gave me as a souvenir of her trip. It bears his name and the abbreviation of his Lions position.

Ellis’ sentimental attachment to his calling only grew stronger after 20 years. His vast collection of Lions memorabilia from around the world, including medals, badges, banners, literature and photos, lavishly displayed from his lobby entrance to his office, is a visible testament to his dedication. passionate about Lions Club causes.

The private museum is his pride. Some of the souvenirs are beautiful works of art such as the lion artifacts of different sizes and also the colors she received from all over the world.

The tradition of giving souvenirs in the voluntary society is very much alive. It further promotes the spirit of camaraderie and volunteerism among members.

Its wall-to-wall collection is a wonderful reminder of the culture of giving. She cherishes even the smallest items received such as the countless badges, key chains, stickers and simple ballpoint pens. Her own generosity is heartwarming and it’s no wonder she remains an active Leo even internationally.

A new home for his ever-expanding collection is on the way. It is also in light of his visitors, especially Lions from other parts of the world, who stop by his office whenever they are in state for conferences or other Lions events. 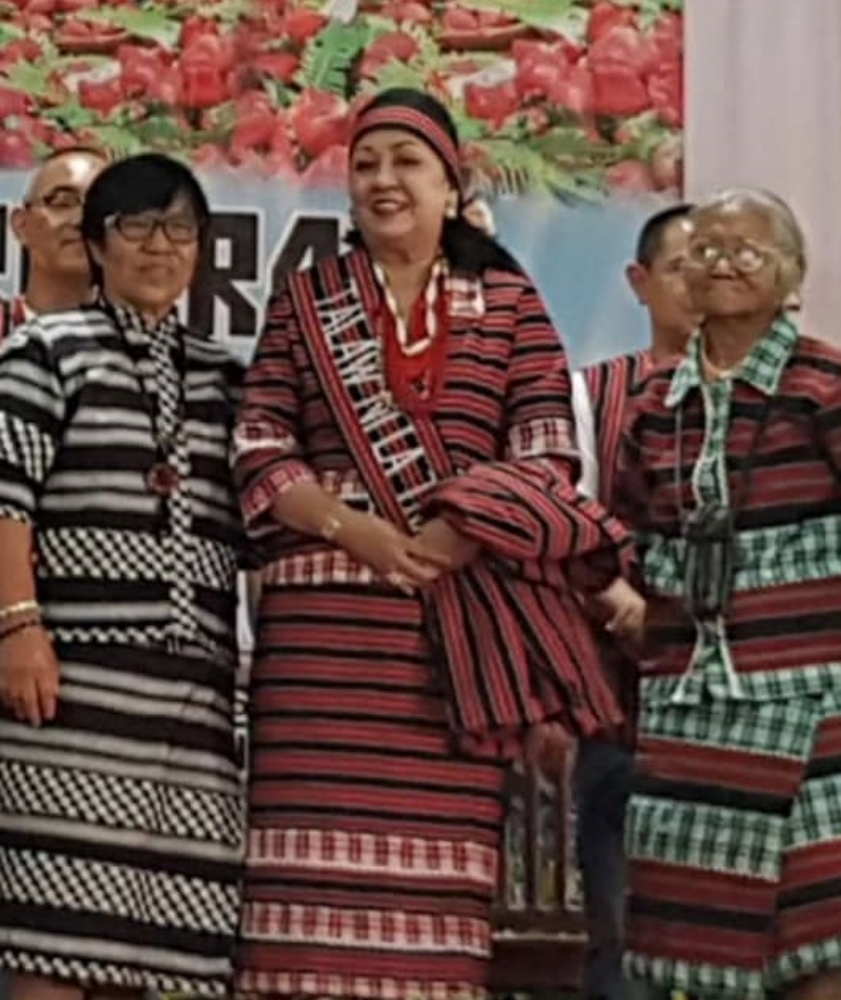 Ellis was adopted as a daughter of La Trinidad in Baguio, for her contribution with local Lions in a humanitarian and environmental project in the Philippines.

The museum is pretty much the only one of its kind internationally.

“There had been another one before that belonged to an SEA Zone Lions officer in the Philippines, but unfortunately it was lost in a big flood several years ago,” she said. the sunday post.

The museum can be hailed as its trophy for a lifetime contribution to the service of humanity without borders, consistent with the mission of Lions Clubs to serve their communities and support those in need through humanitarian service and of grants that have an impact on life in the world, and to encourage peace and international understanding.

“Lionism is my blood,” said Ellis, currently Lions Club International Foundation (LCIF) Area Manager for the Philippines, Singapore, Brunei and Guam – a position she has held since 2017.

Her active involvement in volunteerism began when she was invited by the president of the Lioness Club of Miri to become a member of the society in 1979.

The invitation came at the right time because the young Ellis had just resigned from her job as a flight attendant to follow her husband on a work transfer to the peaceful oil town.

Volunteering, as she had foreseen, would give more meaning to her life. She became club secretary, a position she held for a few years before returning to Kuching with her husband. 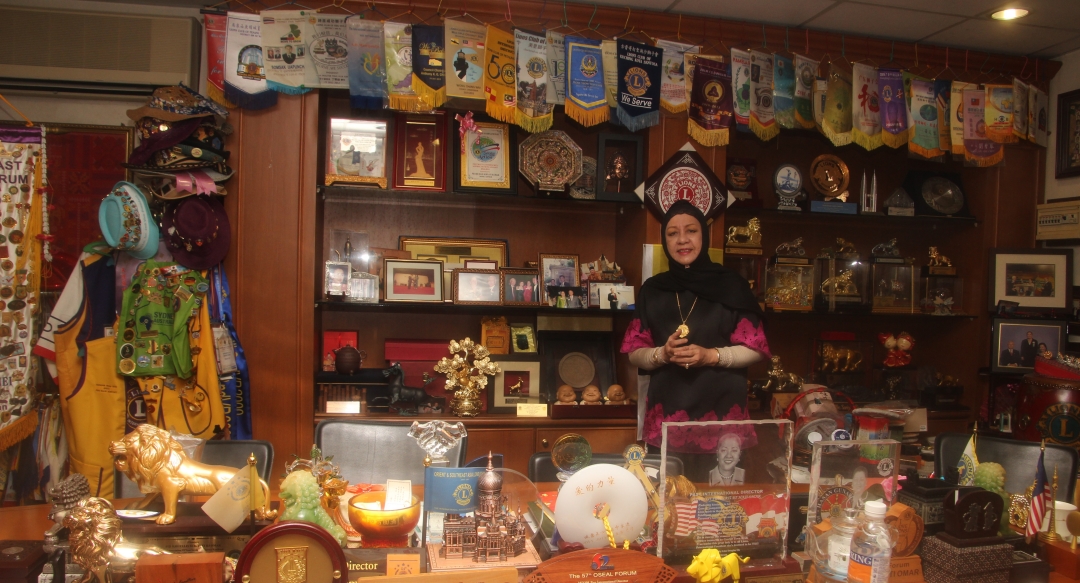 Ellis in his private museum.

Longtime member of the Lions Club

Shortly after her return, she became a member of the Lioness Club of Kuching, where she served on the board of directors as first and second vice-president, respectively, and devoted herself to organizing events. fundraising and other community service projects.

During the process, she discovered that there were few opportunities for women to serve at the international level because the Lions Club constitution at the time prohibited women from joining the club.

When the International Board of Directors amended the Lions Club constitution to admit both men and women in 1987, Ellis fought to have her Lioness club converted to the Kuching City Lions Club.

Despite opposition from some Lionesses, the club became the first Lioness club to be converted into a Lions club in Malaysia, Singapore and Brunei, with her as founding president.

Ellis continued to pave the way for other women to take on higher positions in Lions Clubs, both locally and internationally, being the first woman to hold a number of key positions in the male-dominated sphere. . Indeed, she was the first woman to serve as Governor of Multiple District (MD) 308, and Chair of the Council of MD 308, respectively.

“If the constitution was not changed, we would continue to be under Lions and thus lose many opportunities to serve internationally, regardless of our skill set. We need greater representation of women there” , she pointed out.

One of her most notable accomplishments was serving as international director from 2008 to 2010, making her the first woman in Southeast Asia and the third from Lions Clubs International to hold the position. This made her a possible candidate for the position of Third International Vice President in the near future. Only two women have served as vice-presidents since the club was founded in 1917.

” I do not dream. I believe in working hard to achieve what I aim for – and then whatever happens will be,” said Ellis, who is currently involved with the ongoing global fundraising project, “Campaign 100 “.

“Our goal is to raise $300 million for the foundation, and we are almost there because we have already reached $297 million.

Ellis travels frequently, mostly alone, as part of her duties as a dedicated leader.

She leads humanitarian missions in disaster-stricken and impoverished regions of various countries, in addition to international conferences, conventions and talks.

“I am grateful to God that I can bring Lions from Malaysia to do community service in other countries. I have seen poverty, starving children and disaster areas up close.

“When you sit next to hungry children or give them a bowl of porridge with a sausage and an egg each, your heart breaks because you can see the look in their eyes as if they are asking for more.

“Reaching out to the poor and suffering takes a lot of sweat and tears, but these are the things that motivate me to keep serving.

“After seeing all of this, I am grateful that the poor, needy and other less fortunate people in our country are being taken care of by the government in one way or another.

“There are more humanitarian needs outside of Malaysia. And it takes a strong leader with a heart to bring in volunteers to make it happen,” she said. 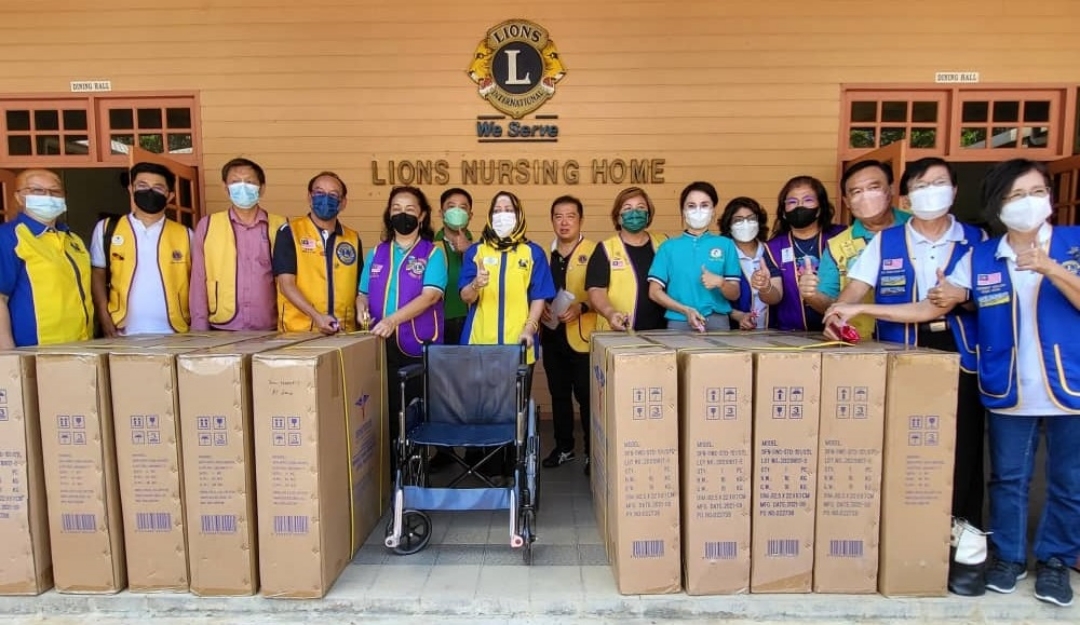 Ellis (seventh from left) and other Lions seen with wheelchairs donated by individual club members and other non-governmental organizations, outside the Lions retirement home.

A Pioneer of Lions Nursing Home

Ellis is one of the pioneer Lions who established the Lions Nursing Home with the support of various institutions, generous donors and other Lions Clubs in 1992.

Located near Stutong Baru in Kuching and believed to be the only retirement home in Malaysia operating under the Lions logo, it is a non-profit facility aimed at helping low-income groups to care for their elderly parents.

“The most difficult period of my life, and also for the rest of the Lions, in the management of the house has been the last two years because of the Covid-19 pandemic.

“We had to find ways to protect the house, staff and residents from further effects. We are also grateful to members of the public who generously donated PPE (personal protective equipment), including gloves and masks, as well as sanitizers, in response to appeals from Lions,” said Ellis, also president of the retirement home.

“We want to continue with the house for as long as we can. The difficult times we went through together during the long pandemic made us stronger. We have become more united and resilient in our voluntary pursuit of community well-being.

In this regard, Ellis underlined the famous adage: “Charity begins at home”.
“I grew up watching my late mother treat people with kindness and always willing to help those in need, despite the fact that she didn’t have much herself.

“She was a teacher, who also ran a grocery store in the village, where she donated rather than sold to people in need.

“These virtues are rooted in me.”

Ellis credits her long-term involvement in volunteerism to her husband, who morally and financially supported her work.

“Without him, I would not have progressed so far in this field which requires a lot of my time.”

For Ellis, family remains her top priority and she always makes time for them.

“I have always believed that to help others, we must first help ourselves, our families and become self-sufficient,” she stressed.